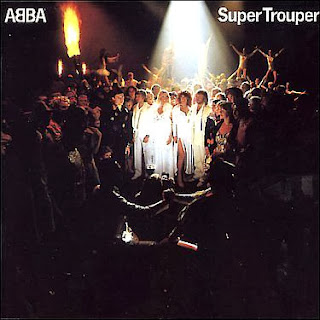 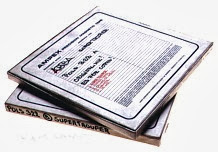 
Side A
1. Super Trouper
2. The Winner Takes It All
3. On And On And On
4. Andante, Andante (The Spanish version was released on 'Super Trouper' in Spanish language territories)
5. Me And I

Side B
1. Happy New Year ('Felicidad' was released on 'Super Trouper' in Spanish language territories)
2. Our Last Summer
3. The Piper
4. Lay All Your Love On Me
5. The Way Old Friends Do

The Piper (working titles: Ten Tin Soldier, Sherwood and Äntligen Krig):
Backing track on 6 February 1980.
More work on backing track on 7 February 1980.
Vocals on 9 April 1980. Flute overdub on 27 April 1980.
Mixing on 24 April 1980. More mixing on 25 April 1980.
Another mix on 6 October 1980.
Final mix for Super Trouper on 7 October 1980.
Other lyrical subjects new to ABBA included that of fascist threats, as introduced on the medieval-sounding 'The Piper'. The words were inspired by one of the main characters in Stephen King's 1978 novel The Stand, a charismatic leader in the Adolf Hitler mould. "The lyrics deal with the fear that there will come a time when people will want such a leader again, "Björn explained". ( from the book 'Bright Lights, Dark Shadows' by Carl Magnus Palm)

Happy New Year (working title: Daddy Don't Get Drunk On Christmas Day):
Backing track on 11 February 1980.
Vocals on 9 April 1980.
Mixing on 25 April 1980.
'Happy New Year' had its roots in the ever-present dream of writing a musical, and came to them while the pair were on the plane to Barbados. Their concept was to structure the plot around New Year's Eve. "We thought it would be a good framework: a few people in a room, looking back on what has been, thinking about the future, that sort of thing," remembered Benny. On Barbados, they happened to meet up with the British comedian John Cleese. Benny and Björn were huge fans, and over dinner they suggested that he write the book for the musical. Cleese wasn't too keen about that prospect, however, and soon enough the whole concept was ditched. All that remained of Björn and Benny's idea was a wishful ballad that was included on the Super Trouper album. ( from the book "Bright Lights, Dark Shadows' by Carl Magnus Palm)

On And On And On (working titles: Esses Vad Det Svänger När Man Spelar Jazz and Till The Night Is Gone):
Backing track on 12 February 1980.
Vocals on 9 April 1980.
Sax overdubs on 17 April 1980.
Mixing on 23 April 1980.
More mixing on 24 April 1980.
'On And On And On' was notable for its inclusion of some Beach Boys-style falsetto backing vocals, courtesy of Benny and highly reminiscent of those in his heroes' 1968 hit 'Do It Again'. The arrangements caught the attention of the group's lead singer Mike Love, who recorded a lacklustre cover of the song for his 1981 solo album 'Looking Back With Love'. ( from the book Bright Lights, Dark Shadows by Carl Magnus Palm)

The Winner Takes It All (working title: The Story Of My Life):
1st backing track on 2 June 1980. 2nd backing track on 6 June 1980.
String overdubs on 16 June 1980.
Mixing on 18 June 1980.
'The Winner Takes It All' was destined to go down as a true classic in the ABBA annals, arguably the best recording they ever made. When the current sessions started on June 2, the melody carried the working title 'The Story Of My Life' and was the first of the new pieces to be recorded. Even at the writing stage, sitting together head to head, Benny at the piano and Björn with his acoustic guitar, they sensed they were on to something special. The first attempt at a backing track was an up-tempo arrangement with a regular, insistent beat. It sounded fine, but the songwriters felt it wasn't exactly what they were after. Benny recalled the track as "much too stiff and metrical". Listening to a rough mix of the recordings in the car on their way back home, they decided to try again. "We felt that it was a really important song, and we wanted to make sure that we didn't lose it," Björn remembered. They let the song rest for a few days.
Four days later, on June 6, Björn and Benny were back in the studio with the musicians for a new attempt. Benny provided the key for the new arrangement when he came up with a "chanson-style", descending piano line, loosening up the structure considerably and giving the song a better flow. As a guide demo for theis new arrangement, Björn put down a vocal track with a France nonsense lyric. Someone even suggested that this new song could perhaps be performed by the lyricist himself. "It's a good thing I didn't", he sighed later, much relieved at having avoided such poor judgement. This was clearly a song that called for expert singing by one of the girls. As was his habit at this stage in ABBA's careers, Björn went home with a tape of the backing track in order to write the lyrics. "I wanted there to be some kind of ambience in the recording," he recalled, "because then I would get a clearer picture of what the song was 'saying'. There was more pleasure in that than listening to some tape of me and Benny banning away on a piano and acoustic guitar.
The layers of French chanson in the arrangement suggested something that called for a touch of the molodramatic: strong feelings about an emotional subject. On this particular night Björn opened a bottle of whisky , and drank freely during the writing process. The alcohol went to his head and fuelled his creativity; it was quickest lyric he ever wrote and also one of the best. "I was drunk, he recalled, "and the whole lyric came to me in a rush of emotion in one hour. And that never works. You think it's wonderful at the time but it looks terrible the next day, but that one worked". When he was finished he had come up with the words for 'The Winner Takes It All'.
The lyric dealed, with, of course, with the break-up of a relationship, always the subject at which Björn excelled during his years with ABBA. He would freely admit hat the heartbreak with Agnetha inspired 'The Winner Takes It All', althought the words weren't meant to be taken literally. 'Neither Agnetha nor I were winners in our divorce", he pointed out. Anyone wanting a lesson in pop song structure, and a near-perfect blend of music, lyrics, arrangement and vocal performance, need look no further than this recording.
"As a melody, it's the simplest ever", Benny remarked. "There are only two different melody lines in it that are repeated throughout the whole song, and yet I think we managed to avoid a feeling of repetition". This was achieved by making the limited variations works to their advantage, contrasting changes in lyrics and melody against constant changes in the arrangement. After the short intro, the first verse sets the tone in the present by declaring, "I don't wanna talk/About the things we've gone through", accompanied only by piano and accoustic guitar, playing gently in the background. Then, after the first chorus, the full backing kick's in, as the protagonist moves her story out of the present and begins reminisching ("I was in your arms/Thinking I belonged there"). An emotional cescendo in the second chorus is followed by a reflective, toned-down third verse - still with the bass and drums driving the song - wherein the singer questions the validity of her former lover's new relationship. In the fourth verse, the song is brought back to the present and the tone of the opening declaration, accompanied only by piano and hesitant strings, before creating the most dynamic contract in the whole piece: The launch of the fully arranged explosion of emotions in the final chorus. Fade-out. ( from the book 'Bright Lights, Dark Shadows' by Carl Magnus Palm) It was as song and recording that had truly evolved from the heart, and everyone who ever heard it would sense this for years to come. 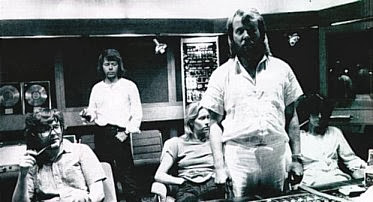 Our Last Summer:
Backing track on 4 June 1980.
Guitar overdubs on 5 June 1980.
More guitar overdubs on 12 June 1980.
Mixing on 19 June 1980.
Another mix on 7 October 1980.
Final mix for Super Trouper on 8 October 1980.
Björn's lyrics were inspired by a teenage romance he had experienced long ago in France. "t was that kind of melancholy memory of 'the last summer of innocence'," he recalled. ( from the book 'Bright Lights, Dark Shadows' by Carl Magnus Palm)

Me And I (working titles: Jackass and Piccolino):
Backing track on 8 September 1980.
Mixing on 25 September 1980.
The hidden gem 'Me And I', featuring an Eartha Kitt-inspired lead vocal by Frida, showed a hitherto secluded side of Björn's imagination. Its split-personality theme - "I am to myself what Jekyll must have been to Hyde" - combined with Frida's forceful delivery put a welcome, darker spin on ABBA's largely bright and wholesome universe. ( from the book 'Bright Lights, Dark Shadows' by Carl Magnus Palm)

Lay All Your Love On Me (working title: Yarrafat):
Backing track on 9 September 1980.
Mixing on 9 October 1980.
Final mix for Super Trouper on 10 October 1980.
Benny's keyboard work came into its own on recordings such as 'Lay All Your Love On Me'. This sequencer-driven dance track sounded very much like a blueprint for much of the more inspirational electro music that emerged a few years into the decade. ( from the book 'Bright Lights, Dark Shadows' by Carl Magnus Palm)

Super Trouper (working title: Blinka Lilla Stjärna):
Backing track on 3 October 1980.
Percussion overdubs on 14 October 1980.
This song aligned itself more with ABBA's earlier, classic style, showing that despite their aspirations towards maturity and complexity, they hadn't forgotten how to spring together a catchy verse and chorus. ( from the book 'Bright Lights, Dark Shadows' by Carl Magnus Palm)

The Way Old Friends Do:
Timpani overdubs for the live recording from November 1979 on October 8, 1980.
Mixing on October 10, 1980.
Final mix for Super Trouper on October 11,1980.
'The Way Old Friends Do' is a live recording from the group's shows at Wembley Arena in November 1979. In hindsight, this Auld Lang Syne-style song functioned as a farewell to the more public part of the group's career. (liner notes by Carl Magnus Calm for the 2001 issue of 'Super Trouper') 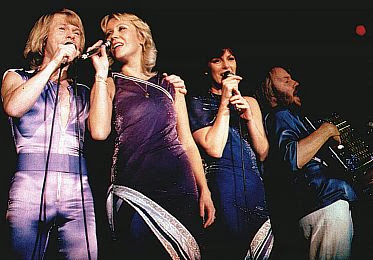 Worldwide single releases from this LP: 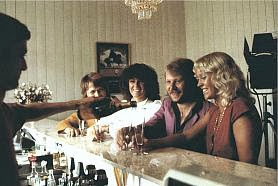 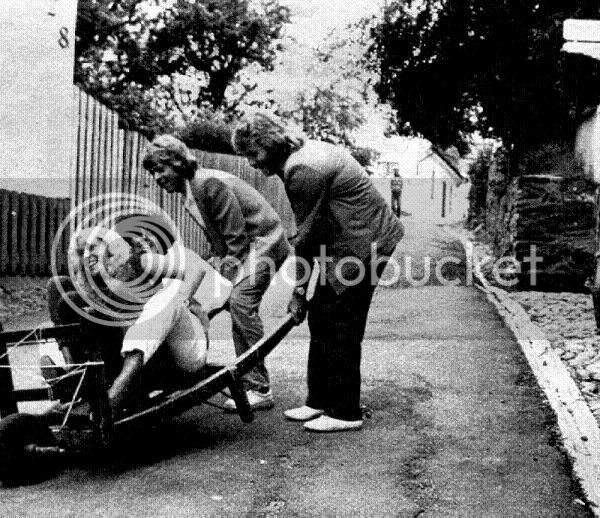 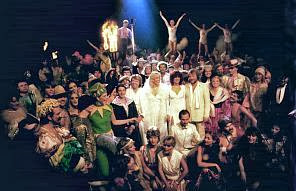 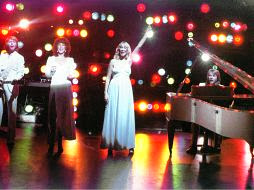 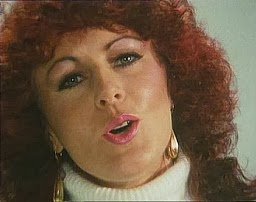 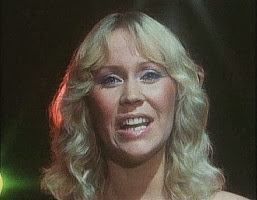 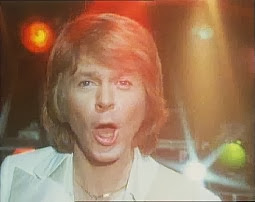 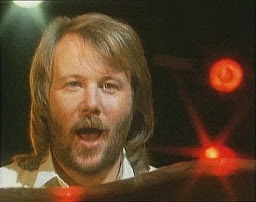 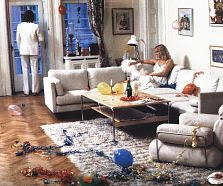 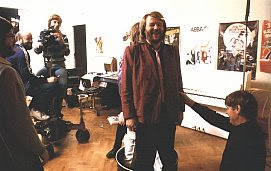 8 November 1980: Felicidad (singing scenes).
On And On And On (Made by Anders Hanser to accompany the slide show of his 1979 tour photos).